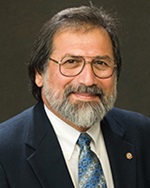 Bob Alvarado is the Executive Officer of the Northern California Carpenters Regional Council, which represents over 35,000 men and women in carpentry and related crafts. He was first elected in 2001, and was elected to a fourth term in August of 2013.

Mr. Alvarado serves as co-chairman of the Corporate Board for the Carpenters’ Funds Administrative Office, overseeing combined assets of over $5.5 billion.

Mr. Alvarado was appointed to the California Transportation Commission by Governor Schwarzenegger in 2006 and 2010. He was reappointed by Governor Brown in 2014 and 2018.

Previously, Mr. Alvarado was a member of the board of the State Compensation Insurance Fund, and the Contractors State License Board.