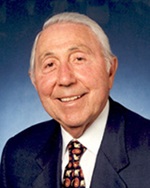 Joseph Tavaglione is President of Tavaglione Construction & Development Inc., a family owned business, started in 1960 located in the City of Riverside. Joe has more than 50 years of experience in the construction field.

Joe and his son Jay comprise Tavaglione Construction & Development Inc. This Company holds licenses in California, Nevada, and Arizona. In October 2002 Joseph Tavaglione was appointed to the California Transportation Commission by Governor Davis, he was reappointed by Governor Schwarzenegger in 2005 and 2009 and by Governor Brown in 2013 and 2017. Joe is the past Chairman of the California Transportation Commission, as well as the past Chairman of the California State Contractors License Board, where he served two terms. Joe also serves as past President of the National Association of State Contractors Licensing Agencies and served two terms on the Riverside Board of Public Utilities.

The Tavaglione Family has been in the Riverside area since 1927.