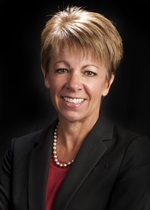 Ms. Eager joined the EDC in September 2009 and is responsible for guiding programs and initiatives to drive inclusive economic growth throughout Fresno County. Her work includes attracting investment to the area, industry recruitment and retention, rural business expansion, and public policy initiatives as part of the region’s vision to create long-term economic resiliency.

A consistent thread throughout Ms. Eager’s career is working to improve the conditions of families in her community. Prior to the EDC, she served as Executive Director of Rape Counseling Services of Fresno, growing the organization’s influence and programs for 12 years, empowering and supporting survivors of sexual violence. During that time, Ms. Eager was the Board Chair of the California Coalition Against Sexual Assault and assisted then Senator Biden in drafting the first Violence Against Women Act. As President/CEO of the EDC, she uses that unique experience in shaping the organization’s programs and priorities to uplift individuals and households to reach self-sufficiency.

Ms. Eager plays a key strategic and leadership role within Fresno County’s local landscape, working with stakeholders within the private, public, philanthropic and academic sectors— nationally and internationally. She’s earned a strong reputation for leading the EDC into becoming a dynamic, agile, and internationally award-winning organization that strives to meet the needs of both employers, workers, and job seekers to take part of the community’s economic growth.

Lee Ann has been a vocal proponent of high-speed rail for the past 10 years, working closely with the trades and workforce partners to align training and employment opportunities for Fresno’s residents. As a business advocate, Ms. Eager launched programming to retain several hundred businesses facing relocation and closures due to high-speed rail right-of-way acquisition and construction, spurring one of the largest job retention efforts in the region. Ms. Eager serves as Co-Chair of Fresno Works, an initiative to galvanize investments around high-speed rail in Fresno County.

Governor Brown appointed Ms. Eager to the California Workforce Development Board, California Partnership for the San Joaquin Valley and to the Governor’s Advisory Council on International Trade and Investment. Ms. Eager serves as the President of the Board for Access Plus Capital and holds several Board positions including the California Central Valley Economic Development Corporation, Fresno State Transportation Institute, Lyles College of Engineering, Department of Geography and City and Regional Planning Advisory Council, Fresno City College President Commission on Industry, the Fresno Mayor’s Advisory Council and Fresno State Alumni Association Board of Directors.