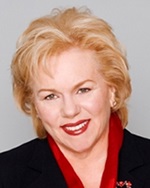 Lucy Dunn is President and CEO of Orange County Business Council, where she leads a dynamic organization of business members, working with academia and government, to assure the region’s economic prosperity and high quality of life. Before joining the Business Council, Lucy served as Director of the California Department of Housing and Community Development in 2004. In 2008, she was appointed to the California Transportation Commission by Governor Schwarzenegger, reappointed twice by Governor Brown, and was elected Chair from 2015 to 2016. She also serves on numerous boards including California Economic Summit, Mobility 21, Pacific Symphony, Bolsa Chica Conservancy, and UCI Foundation.

She is the recipient of numerous honors and awards including Orange County Business Journal’s "Women in Business" award, Women in Transportation’s "Woman of the Year" award, Southern California Leadership Network’s Public Sector Leader of the Year, and the prestigious "Vision and Visionaries" Award from Cal State University, Fullerton. She was twice named as "Woman of the Year" by the California Legislature. In 2014, Orange County Register named her as one of "Orange County’s 100 Most Influential." In 2016, she was honored by the Endangered Habitats League with its Award of Excellence for her work in advancing settlement of 15 years of litigation, protection of habitat and cultural resources, while improving South Orange County mobility. Lucy is a member of the State Bar of California. She loves travel, music, with her proudest role as mother of two sons (and one accomplished daughter-in-law!) who reside in the Bay Area.