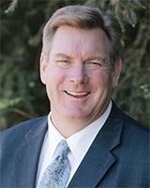 Paul was appointed to the commission by Governor Edmund G. Brown Jr. in August of 2017.

Additionally, Paul has advised many nonpartisan political campaigns and initiatives at the local and regional level. Paul has annually served in leadership of the Stanislaus County’s DC Collaborative, an organization that advocates for federal funding of regional public works projects in Washington DC. Working in collaboration with Democrats, Republicans, business leaders and labor unions, he has built coalitions based upon common interests and goals to achieve measurable results.

Paul has served on the Board of Directors of various non-profits including Stanislaus County Youth for Christ and Modesto Christian School. Additionally, he has served in leadership on the Modesto Chamber of Commerce Land Use and Transportation Committee as well as the Modesto Downtown Rotary Club.

Paul holds a bachelor’s degree in Managerial Economics from the University of California at Davis. While at U.C. Davis he was involved in varsity athletics, student government and was the recipient of the Chancellor’s "Outstanding Senior" award.

Paul has been married to his wife, Sheila, since 1991. They have two sons, Landon and Jaxon.