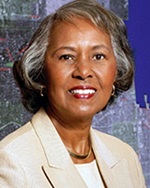 Yvonne B. Burke, served four terms on the Los Angeles County Board of Supervisors and Los Angeles Metro serving as Metro Board Chair in 2005. She was appointed by Speaker Nancy Pelosi to the six member Committee on Congressional ethics in July 2008. In 2012 President Obama appointed her to the Board of the National Railroad Passenger Corporation (AMTRAK) and she was confirmed by the Senate in 2013. She was reappointed to serve on the California Transportation Commission by Governor in March 2017. She also serves and the Board of Directors of LA 84 and Century Housing.

She is a mediator and arbitrator with American Arbitration Association (AAA), and Financial Industry Regulatory Authority (FINRA). As a product of the Los Angeles Unified School District, Burke attended Manual Arts High School, where she developed her interest in public speaking by joining the oratory society and participating in citywide competitions. Her numerous extracurricular activities helped to earn her scholarships from the University of California, Berkeley, and received a BA Degree from the University of California, Los Angeles.

She received her J.D. from the University of Southern California, School of Law in 1956. During this era, many private law firms showed no interest in hiring women. She worked as a Deputy Corporation Commission and later had her own firm. She served in the California State Assembly representing the 63rd District from 1966-1972. She became the first African-American woman elected to the U.S. congress from California, in 1972, representing California’s 37th District. She was selected to serve as vice chair of the 1972 Democratic national Convention in Miami and later on the House Select Committee on Assassinations. In 1973, she became the first member of Congress to give birth while in office. She did not seek re-election to Congress in 1978, instead she ran for Attorney General of California.

She became a Public Finance and Real Estate Attorney with various firms and from 1987 to 1993 was a partner in the firm of Jones, Day, Reavis & Pogue.

In 1984, she was selected to serve as vice chairman of the U.S. Olympic Organizing Committee, and served as Chair of the Los Angeles Branch of the Federal Reserve Board and a Regent of the University of California before becoming the first African-American elected to the L.A. County Board of Supervisors, in 1992. She served on the Board of Ford Foundation and Educational Testing. She has honorary doctorate degrees from Pepperdine University and Virginia State University.

As a Los Angeles County Supervisor, she represented nearly 2.5 million residents in the nation’s largest county. Her efforts focused on improving the lives of children, economic development and improving transportation. Her unused campaign funds were donated to the Burke Education and Policy Foundation that has provided over $300,000 in scholarships for Los Angeles college students. She is married to Los Angeles businessman Dr. William Burke and they have two children Autumn and Christine.